Superfood for babies? It's mother's milk!

Committed formula feeders are free to blog, tweet, post and establish online communities and the manufacturers of artificial formula can blatantly infringe the WHO marketing code. Hardly surprising that breastfeeding and mother’s milk as I wrote in Healthy Parents, Healthy Toddler is a “dream product in decline” There’s a great deal more in the same vein in the most recent report from Save the Children: Superfood for Babies - how overcoming barriers to breastfeeding will save children’s lives.

My last blog talked about having better educated, more empathic experts involved at the coal-face where breastfeeding can be easily and well-established to ensure that women enjoy the experience and their babies thrive. The new mothers must also be free to make their own decision to breastfeed, not an easy task in countries where husbands or mothers-in-law are frequently the decision-makers. More enlightened maternity leave practices enshrined in legislation and work places with creches are required too ...

But the formula manufacturers are another story - commercial interests know only one outcome - a healthy bottom line. So they simply ignore the international code of marketing of breast milk substitutes, which was adopted by the World Health Assembly in 1981. Gifts and incentives to health workers to promote formula and advertising that targets pregnant women both breach the code, but when the pot of gold is so large (worth $25 billion annually) then it's anything goes.

With exponential growth of the BMS (breast milk substitute) market in the developing world likely to deliver record profits and investor returns, what can stop the juggernaut which has resulted in breastfeeding rates decline from 45 percent in 2006 to 29 percent in 2009? Two-thirds of the 92 million children who are not exclusively breastfed in the first six months live in just 10 countries – India, China, Nigeria, Indonesia, Philippines, Ethiopia, Vietnam, Pakistan, Bangladesh and Democratic Republic of the Congo – seven of which have some of the highest child mortality rates in the world.

What is required to reverse the trend when Save the Children estimates that 800,000 deaths could be prevented annually if breastmilk was given in the first hour of life? Making the now-voluntary code legally enforceable would be a good place to start. Give the enforcers real teeth and make the fines for breaching the code capable of seriously damaging a company’s balance sheet. If the market is worth billions, then a fine has to be of the same order. 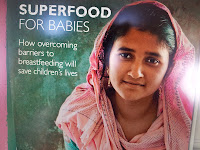 And make sure that educators and health workers have a voice! Levy a tax on the infant formula manufacturers, one equivalent to their marketing dollars and promotional budget, and use it to promote the normality of breastfeeding. Then tell women that formula or breast need not be an either/or choice. If the reality of going back to work means introduction of substitute feeds, breastfeeding must still be seen as the normal thing to do in the hours when the mother is reunited with her baby or toddler!
Posted by Unknown at 10:12 AM