Eat a rainbow every day!

In February 2013, The 6th International Congress on Vegetarian Nutrition (ICVN) revealed the study damning the American Heart Association’s “low-fat diet” but promoting Mediterranean-style eating habits to protect against cardiovascular disease and stroke. Now they reveal that those who eat predominantly plant-based diets are healthier than their meat-eating mates. Vegetarians are consistently slimmer and have a reduced risk of cardiovascular disease, diabetes and cancer!

There’s yet no consensus on the “why”, many ideas have been proposed. Lower BMI, increased intake of fibre and phytonutrients, vegetarians likely to be better-educated and less likely to drink or smoke are some of the them. Since this finding is one of the most “consistent of nutritional epidemiology” I’d like to propose that the answer might partly lie in the very different gut microbiota that would be found in the plant vs meat eaters!  The National Institutes of Health makes it clear that plant-eaters have a more diverse gut population than meat-eaters.

Apart from getting on the gut health soapbox yet again, I might have to modify my mantra which has always been “healthy food, grown on healthy soil” to something like the one proposed by David Jacobs PhD Mayo Professor in Epidemiology at University of Minnesota who gave the ICVN conference “Eat food. Mostly plants. Not too much. In colourful variety. Maximize nutrients per bite.” Couldn’t put it any more simply than that! 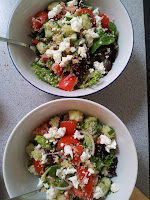