Competitive eating? ... only in the USA!

When the national health budget exceeds $74 billion and it is proposed that the whole population will be overweight sometime in the next year or two, who would think to promote competitive eating as a spectator sport? Surely, celebrating gluttony would have to be a totally inappropriate tribute to the fattest population and the unhealthiest eating habits on the planet.

If you really want all the gory details of the competitors who munch their way at breakneck speed through any/all of a long list of mammoth proportions of foodstuffs of all persuasions, check out Byliner’s “Horsemen of the Esophagus” by Jason Fagone. Frankly, I could do no better than quote The Guardian UK, who in 2002 called it “a sport for our degraded times” and Ralph Nader sounded alarm bells citing four signs of societal decay - the fourth being “competitive eating.”

Meanwhile, back in my hometown Sydney, our daily tabloid reported death of a pie-eater involved in just such a contest while watching recent State of Origin clash at his local pub.

Mind you, the records assure us that gorging in front of an audience has a strong historical precedent, what has happened recently however has elevated it to new heights and taken it to millions as a spectator sport. Good heavens, it’s even on ESPN! Some proponents suggest it may rise to achieve Olympic status?

What hope is there? Salad anyone? 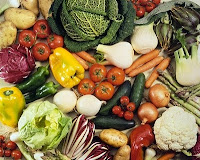