Bring back the butter and cheese

So glad I never gave up my butter and cheese! Weston A. Price was right ... all those years ago when he observed the ill-effects of modern diets (refined, white and sugar-laden) on communities around the world, he maintained the importance of the fat component of the diet, as it contained the fat-soluble Vitamin A which he considered an activator!

Weston Price noted that the traditional diets of every community under study (and these ranged from Pacific Islanders to Inuits of the Arctic plus many in between) contained at least ten times as much vitamin A as the American diet of his day. His work revealed that vitamin A is present only in animal fats and necessary for the assimilation of minerals in the diet. He noted that the foods held sacred by the peoples he studied, such as spring butter, fish eggs and shark liver, were exceptionally rich in vitamin A.

It’s only taken scientists 80 years to come (partly) to their senses. Sadly, during that time, several generations have been guided to inappropriate choices of poly-unsaturated vegetable oils and refined carbohydrates as a low-fat, reduced-fat substitute for saturated animal fat (and coconut oil) in the mistaken belief these were healthier choices.

It's such a simple mantra, but one I keep repeating ... "healthy food from healthy soil"! Still amazes me that we could honestly think the man-made rubbish could improve on nature’s natural bounty - whether that bounty be plant, animal, bird or fish. 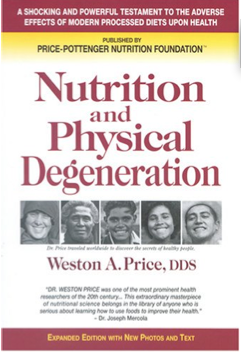