The burning question - again - which supplements during pregnancy?

Do we really need any more studies or public awareness campaigns like this one? The British Nutrition Foundation (BNF) is seeking insights into general public opinion on supplementation in pregnancy.
The evidence for robust, comprehensive, balanced nutritional supplementation during pregnancy could not be any clearer. From conception to the end of the first trimester, the mass of the embryo increases over 2 ½ million times. This is the period during which cells differentiate and organs are formed. This rapid phase of growth requires levels of nutrients that are many times higher than those required during the non-pregnant state. What’s more, the growth during this phase occurs to a very strict timetable. So the development of the embryo exactly according to plan, the health of the uterus and placenta and every other aspect of reproductive health, including the production of a plentiful supply of high quality breast milk, are dependent on an optimal supply of vitamins, trace minerals and essential amino and fatty acids.
Put simply, a diet which is good enough to sustain a woman in adult life may fail to support her adequately during reproduction. Compromised nutrition is at the very foundation of compromised reproductive health. But, as well, many congenital defects, which were once considered to be due solely to genetic factors, can be manipulated at will by inducing a deficiency in one or more of the essential nutrients. Conversely, the effects of a defective gene can be suppressed when there is an optimal supply of a specific nutrient (or nutrients).


The long-term effects of sub-optimal nutrition during pregnancy have been highlighted in UK studies showing that compromised nutrition in utero has a powerful influence on the development of chronic degenerative disease. Poor foetal growth is a strong predictor for hypertension, diabetes and mortality from cardiovascular and chronic obstructive airways disease in adulthood. Professor Barker of the University of Southhampton (and author of Mothers, Babies and Disease in Later Life), says: 'Undernutrition in foetal life has a permanent, detrimental effect on the baby's metabolism, hormonal response, immune function and organ development and increases susceptibility to disease in later life, including cardiovascular disease, diabetes and respiratory illness.'


You'll learn everything you need to know about the best products for improving fertility and having a truly healthy baby in my new 10-part webinar series. Watch the free intro now! 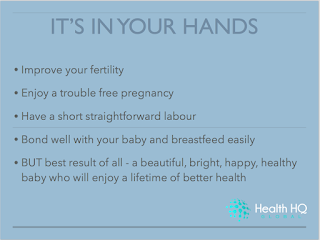