Conversations with kids, a trip down memory lane

It wasn’t just my blog post encouraging parents to spend more time with their kids...

Recently I’ve had reminders of the blessings bestowed when children have a full time ‘someone’ in their early years. An extremely articulate four year old provided an example of the language development fostered by a constant one-on-one. Thoughtful responses to every ‘why’ will prompt more ‘whys’, but that need to understand the world and its workings is a powerful driving force at the age of four. Taking the time to explain, rather than a response to shut down or short circuit more questions pays big dividends.

Today in the street, I turned in response to a voice. A young mum, baby in a sling and toddlers side by side in a double stroller, was engaged in conversation with her children. She was oblivious to the fact that passers-by might wonder at her stream of consciousness. Made my heart glad - so often mum is plugged into her iPhone, oblivious to the dialogue she could be having with the small person in close proximity.

Conversations with little kids is never-ending. Apart from the endless Q&A, every activity provides opportunities. When the grandmother of aforementioned four year old produced a wooden puzzle that once belonged to my boys, I was transported back to the many times we’d spent putting it together. Naming the various animals in their rather stylised forms led to the creation of personalities and stories for each one. An image sent to the smart phones of two young men confirmed that their memories of said puzzle were just as clear and as fond as mine. 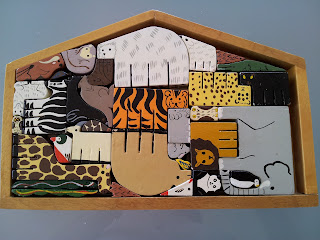