Thanks to all the wonderful friends and fans who voted (and voted again) and made sure I finished at Number 11 in Top 25 Mom author bloggers. In a few days you’ll be able to read the associated interview. The question “how did you balance motherhood and writing?” gave me pause ... I never really know how to answer this one. Looking back I wonder. I started writing just after Dave was born, waxing lyrical about the benefits of preconception care, birth at home, family bed and more. I just kept adding odd comments - they all went down on a big tatty notepad. Twenty seven years on, with all the new whizz-bang technology and my embrace thereof, I still jot notes on pieces of paper, napkins, backs of invoices, whatever comes to hand when inspiration strikes.


So my first manuscript, which became four books began as occasional, random jottings. I can also remember trying to transcribe those jottings, using an early Apple Mac with a sleeping baby nestled in a sling - my hands reaching for the keyboard over the top of his head. It was a drawn out process, from Dave’s birth in 1985, to first submission of a complete manuscript in 1990, through rewrites after several rejections, to hook-up with my brilliant co-author, to our first contract in 1994, through another massive re-write, to publication of The Natural Way to Better Babies in 1996. After that the process was much easier, boys were older, I had more free time, I could write and edit while watching their sporting activities, even when Alex took them out and left me blissfully and totally free of interruptions for a few hours. But 'easier' is only relative to what went before... so that means that my most recent books, published this year have been an absolute breeze. Going back to the mass of material I’ve created for multiple channels (I never delete anything), the manuscripts were completed in about 8 weeks. 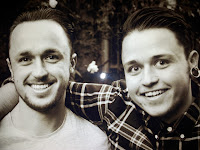 But the greatest joy in their creation was the contribution of Dave (Better Baby #1) and his wife Pauline, both hugely talented chefs. Their recipes bring a fabulous element to both Healthy Parents, Healthy Baby and Healthy Parents, Healthy Toddler - an element which neither Francesca nor I were ever able to tackle. Another element of the new books, their integration with an interactive casual game, was helped along by many discussions and brain-storming sessions with Mikey, (Better Baby #2)! So my writing has really come full circle ... those years of trying to write while kids were underfoot are long gone and my latest writings have been hugely enhanced by those two young men who were once underfoot. Given that the boys inspired my books, I can see there's a wonderful balance between my writing and motherhood, in ways that I could never have anticipated and in ways I'm sure the Circle of Moms interviewer never intended when she asked the question!