A fabulous gathering of intelligent, creative, successful and switched-on women gathered for a breakfast and panel discussion on International Womens' Day, with the theme to be explored? #BeBoldForChange.

There was provocative discussion of the female attributes that regularly stop women from putting themselves forward for advancement, the frequent dismissal by male counterparts of women seeking top jobs, the lack of mentoring for very able and high-achieving women, the need for or usefulness of male/female quotas, the many reasons corporations do better with greater diversity, the ways to encourage our daughters (and sons) to do things differently in the future … and so much more.

All valid, all sensible, all thoughtful and hopefully encouraging, perhaps even inspiring, for the many women who have fought and continue to fight gender discrimination, wage inequality and so much more in their working lives. But listening to it all, I wondered if an important piece was missed.

If I were to #BeBoldForChange I would suggest that mothering be restored to a place of greater prominence in women’s lives. Let’s face it, we are uniquely designed and equipped to shape the next generation! No one else can do it as well or as completely as we can. No boardrooms, no institutions, no coterie of blokes can be as powerful as women who embrace mothering as the most important career they will ever do. Shaping the next generation starts well before conception (of course you might expect me to get on that soapbox) but at every step of the way to becoming a mother, there is a chance for that power to be diminished (by procedures mostly developed and prompted by the blokes).

Yep, the (mostly) fellas try to take it away from us … try to disconnect us from the power that we alone have, try to make less of the miracle that is becoming a mother! It can start with IVF, a process increasingly commonplace, it’s furthered with the plethora of prenatal diagnostic screenings, with the monitoring and management that accompany labour and birth. It continues with the advice that is dished out by the various experts, often advice that conflicts with a mother’s powerful gut instinct, it’s exacerbated when women aren’t given time to bond with their baby, when social, commercial or whatever pressure sends them back into the workforce leaving their infant to be cared for by others. The mere fact that women are expected to return to work within months rather than years diminishes the value of their mothering role and the importance of their influence in those early years! No wonder mothering is no longer seen as the most important career you'll ever have - no wonder having a baby is often perceived as just another ‘run on the board.’

And before I have a bunch of magnificent women (mothers or not) turn on me, mothers need all the support they can get. Because that was another theme of the Panel Discussion - we gals have got to stick together!

Mothers need support for securing enlightened and meaningful maternity leave, for ensuring that taking time out for a mothering career does not mean they fall off the ladder of their professional career. They need help to make job-sharing a viable, sensible reality, they need work-from-home options, they need start-work and go-home times to be realistic in terms of what’s required to get their family fed, watered and otherwise taken care of. They need to be able to attend Sports Carnivals and be around with the kids during School Holidays without fear of ramifications in the workplace. 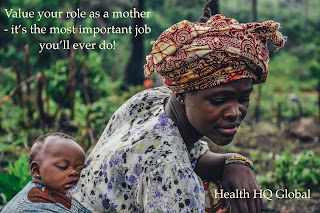 Equality for women is about a great deal more than ending gender discrimination in all its forms and ensuring there are more women on boards. If we truly hope to change the world and I know women will be the ones to do it, we have to go back to the beginning and conceive, birth and nurture healthy, happy, emotionally secure children. We need to take the time to do that when it has the greatest impact - the first 2-3 years of the child’s life! Then we can step back into the workplace, secure in the knowledge that we’ve put the strongest possible foundations in place for the physical, mental and emotional health of the next generation. Who knows, we may even decide that sitting on the Board in the Boys Club isn’t all it’s cracked up to be. After all ... when you get to the end of your life, will you wish you’d spent more time at the office? Probably not ... but you might wish you’d spent more time with your family. 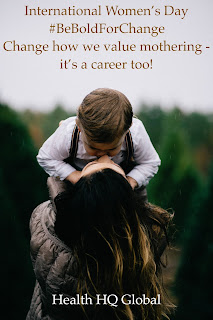 HOW I GOT CURED OF HERPES VIRUS.

Hello everyone out there, i am here to give my testimony about a herbalist called dr imoloa. i was infected with herpes simplex virus 2 in 2013, i went to many hospitals for cure but there was no solution, so i was thinking on how i can get a solution out so that my body can be okay. one day i was in the pool side browsing and thinking of where i can get a solution. i go through many website were i saw so many testimonies about dr imoloa on how he cured them. i did not believe but i decided to give him a try, i contacted him and he prepared the herpes for me which i received through DHL courier service. i took it for two weeks after then he instructed me to go for check up, after the test i was confirmed herpes negative. am so free and happy. so, if you have problem or you are infected with any disease kindly contact him on email drimolaherbalmademedicine@gmail.com. or / whatssapp --+2347081986098.
This testimony serve as an expression of my gratitude. he also have
herbal cure for, FEVER, DIARRHOEA, MOUTH ULCER, MOUTH CANCER FATIGUE, MUSCLE ACHES, LUPUS, SKIN CANCER, PENILE CANCER, BREAST CANCER, PANCREATIC CANCER, CHRONIC KIDNEY DISEASE, VAGINAL CANCER, CERVICAL CANCER, DISEASE, JOINT PAIN, POLIO DISEASE, PARKINSON'S DISEASE, ALZHEIMER'S DISEASE, INFLAMMATORY JOINT DISEASE CYSTIC FIBROSIS, SCHIZOPHRENIA, CORNEAL ULCER, EPILEPSY, FETAL ALCOHOL SPECTRUM, LICHEN PLANUS, COLD SORE, SHINGLES, CANCER, HEPATITIS A, B. DIABETES 1/2, HIV/AIDS, CHRONIC PANCERATIC, CHLAMYDIA, ZIKA VIRUS, EMPHYSEMA, LOW SPERM COUNT, ENZYMA, DRY COUGH, ARTHRITIS, LEUKAEMIA, LYME DISEASE, ASTHMA, IMPOTENCE, BARENESS/INFERTILITY, WEAK ERECTION, PENIS ENLARGEMENT. AND SO ON.

Wonderful Blog! International Women's Day is a fantastic opportunity to acknowledge the achievements of women. This year's celebrations will be a little different due to the global pandemic. We have a list of virtual women's day celebration ideas on how you celebrate women's day 2022 virtually.

To give a unique twist to your virtual celebrations, we have compiled a list of Online women's day celebration activities for your employees. These activities will help keep the enthusiasm high throughout the party and save everyone from cheesy speeches.