TTC? All you need to know, and some of it is ancient history

Three months of coenzyme Q10 supplementation may improve the morphology and motility of sperm in infertile men, according to new data.

Well not so sure how “new” that data really is ... my co-author and I have included a specialty product for men “CoQ10 Lipoic” in our NFM range (for fertility, preconception, pregnancy and breastfeeding) for several years. But researchers reinventing the wheel is nothing new. Just like the whole preconception/fertility story really.

No doubt that both partners actively preparing for conception has never been more important, but it’s not a new idea – even the Ancient Greeks and Romans knew that alcohol, drunk before and around the time of conception, was damaging to the fetus. They banned the drinking of alcohol by young women and newlyweds! Many tribal societies fed special diets to their young women (and young men) of child-bearing age. Back in the 1930s, Dr Weston Price (a dentist) studied communities from around the world and clearly established the link between consumption of a refined Western diet and compromised reproductive outcomes.

The Great Dutch Famine or Hunger Winter as it was known, which lasted from October 1944 to May 1945 provides us with some fascinating insights. Studies have shown that women exposed to the food shortages before and around the time of conception, had poorer reproductive outcomes than the women who were subjected only to food shortages during their pregnancy. And that’s just the tip of the iceberg. The next generation was shown to be prejudiced if the mother was in utero during the first trimester when her mother was exposed to food shortage. Those early observations became later research in the field of epigenetics and is what makes active preparation of both prospective parents in the time before conception so incredibly exciting and worthwhile!

All the details of what to do, what to eat, what to avoid and best products to support your combined efforts in Healthy Parents, Healthy Baby and for those who want even more detail and the research behind the recommendations, you’ll enjoy my first book The Natural Way to Better Babies, which was inspired by my own very positive experiences! Conceived in the first cycle of TTC at 37, wonderful healthy pregnancy, three hour labour, successful long-term breastfeeding and repeat experience when I was 42. Best of all, my boys now 27 and 23 years old have always enjoyed the most robust physical and mental health!

Never too soon to get started - the health of your children is in your hands! 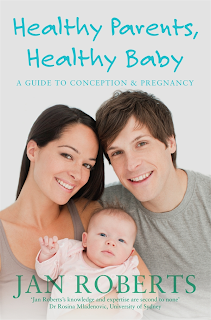 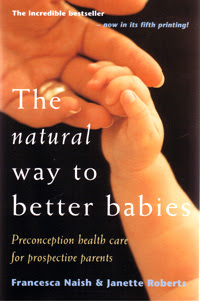